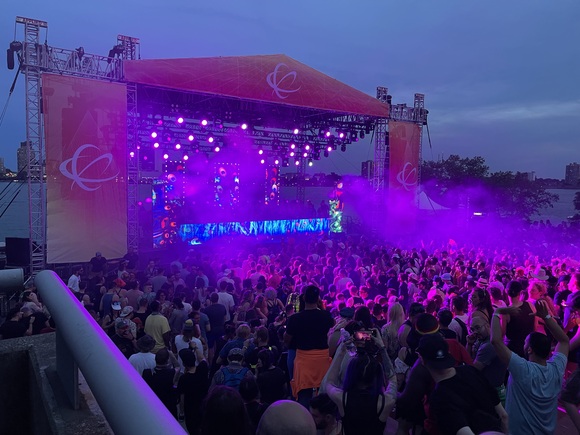 Held in the city considered to be the birthplace of techno, Movement Festival is an annual three-day electronic music festival that brings thousands of fervent audiences to Detroit every Memorial Day weekend. After being postponed in 2020 and 2021 due to the COVID-19 pandemic, 2022 marked Movement’s highly anticipated return to form and a chance for the close-knit electronic music community to finally gather in person once again.

“Detroit techno was always a dark room and a huge PA––it didn't matter what kind of lights you had or whatever; if you wanted the visceral experience in regards to clarity and a loud sound system, you came to Detroit in the nineties,” explained Sam Fotias, Director of Operations, Paxahau. “Since we all came up in that paradigm, that's what we bring to the table for the festival. We don't have a decibel cap, and all of our systems are designed five times more than what is needed for the coverage at each stage”

Working within the gear, personnel and budget constraints of a still-recovering live music industry, Movement organizers Paxahau required a live audio system that upheld the festival’s well-known reputation for unrivaled, immersive sound at every performance area. To meet these goals, Thunder Audio designed and deployed dynamic, streamlined rigs featuring JBL VTX A12 loudspeakers and B28 and S28 subwoofers for several of Movement’s stages.

“We have a reputation that when you come to Detroit to the Movement Festival, that the audio experience is going to be spectacular,” said Mike Fotias, Production Manager, Paxahau. “Thunder Audio, being our partner for almost all of the years that we've been doing the festival, has worked very closely with us in always making sure that not only do we have the latest technology deployed in our sound systems, but also that there is very solid engineering and design that goes into each one of those sound systems”.

“One of their key goals is, as Mike Fotias always says, ‘the stereo,’” added Greg Snyder, Senior VP of Sales and Engineering, Thunder Audio. “The stereo has to be second to none. If you don't remember anything about Movement other than that the audio was amazing, then we did our job. Therefore, the involvement of JBL has become part of our routine.”

Equipped on the Stargate, Red Bull and Pyramid stages, the JBL VTX A12 is a line array speaker designed from the ground up to best serve the needs of festivals and touring productions, from its next-generation speaker components to its innovative and streamlined rigging system. Crucially, the A12’s redesigned Radiation Boundary Integrator (RDI) and advanced HF and LF sections delivered distortion-free audio across a wide area of coverage, which aligns perfectly with Movement's ultimate goal: to equally deliver massive, impactful sound to every person on the dance floor.

“We’ve always loved the crowd power from JBL products, but now the A12 adds so much more dimension,” said Snyder. “The clarity of the speakers are, I think, second to none. There's a different acoustical quality than you might find from other manufacturers; you may call it the JBL sound, but the truth is the clarity on the A12 is pristine in any application that you use in, including in corporate.”

Alongside the A12 at the Stargate, Red Bull and Pyramid stages—as well as the semi-indoor Underground stage—the JBL VTX B28 subwoofers delivered a deep, immersive bass response as low as 25 Hz––a must-have for bass-heavy music genres like techno and electronic. Equipped with Differential Drive woofers and a specially designed double-flared port for reduced turbulence and a clear bass response, the B28 also sports the same quick-rigging system found on the A12 for maximum sound with minimal setup. The Underground stage, a low-ceiling space intended for more aggressive and high-energy artists, most prominently featured the B28 alongside JBL VTX V25 and VT4888 speakers.

“We were able to take the VTX product and model it in our acoustic environments and come up with some designs that ended up being very impactful, not only from the standpoint of max SPL, but also in fidelity and getting the smaller equipment footprints in relation to the space that we had for the dance floor areas,” said Mike Fotias. “One of the things that I like about JBL, especially the VTX Series, is how each product is a complete engineered solution to the application. It's not just speakers, it's a turnkey scenario with amplified controllers and speakers right down to the way that the rigging works. It's not just about a good sounding speaker; it's the sum of an engineered system.”

Throughout each stage, the VTX speakers performed at the level that artists and audiences expect from Movement, providing unmatched sound, wide coverage, and high-but-clear output throughout the weekend. Snyder praised the speakers for their effective coverage and versatility, which proved crucial for the seamless transitions between artists with widely varied setups at each stage.

“We wanted to make sure that we knew where people were going to be and how to control the audio,” said Snyder. “JBL gave us that ability, with their aiming software and onsite support, to be able to confine audio, reach limits, and then to drop off so that each zone had its own coverage versus the audio all meeting in the middle and being chaotic.”

“The one moment that we look forward to every year when we do this festival is when we turn the sound systems on and start sound checking them because it's like, this is it,” said Sam Fotias. “And when you're in the sweet spot at each stage, you are completely enveloped. I got to really hand it to my brother and the team at Thunder for doing an incredible job with the amount of thought and engineering put into all of it.”