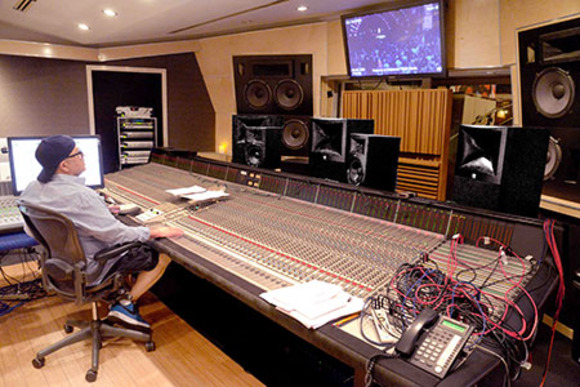 
NORTHRIDGE, California – On May 15, Pitch Perfect 2 starring Anna Kendrick opened in theaters nationwide grossing more than $100M in just two weeks. At the heart of the film’s success is its musical score. Supervising Music Mixer Joseph Magee, whose credits include the original Pitch Perfect, Saving Mr. Banks, High Fidelity and Into the Wild, recorded and mixed all of the a capella vocal performances using HARMAN’s JBL M2 Master Reference Monitors in a specially-built studio on location in Baton Rouge.
To produce and record the cast’s engaging vocal performances, Magee deployed JBL M2 Master Reference Monitors used in an L/C/R configuration, before shipping them back to Los Angeles where they were installed for mixing at Encore Studios and final dubs at Sony Studios. Magee also used a pair of JBL powered 3 Series LSR308 studio monitors as his near-field listening system.

The M2’s compact footprint and accuracy make it ideal as a main monitor in a broad range of environments. “A lot of people perceive the M2’s as monitors that are meant to be permanently installed in a control room, tuned to the room and then left alone. But the reality is these loudspeakers sound great out of the box, so taking them to Baton Rouge was an easy decision,” Magee said.

Having used other large-format studio monitors, in Magee’s opinion, JBL’s patented-pending Image Control Waveguide, coupled with JBL’s patented low-distortion D2 high-frequency driver sets the M2 apart from the pack. “The D2 is so darn fast, and the system delivers such detail, I’m hearing things I haven’t heard before in my mixes and I’m hearing things differently—in a good way,” he said. “The M2 system performed exceptionally, day in and day out, and I think moviegoers will enjoy the results!”