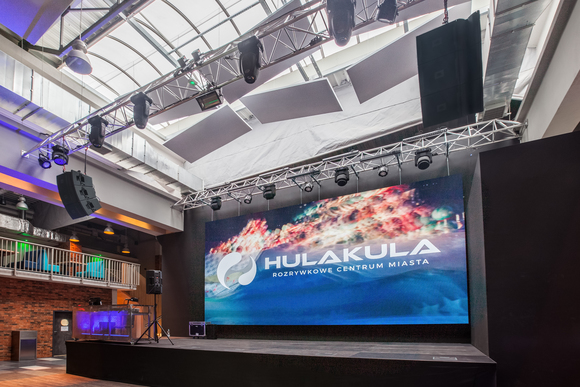 WARSAW, Poland – Following its earlier closure, Poland’s Hulakula Entertainment Centre, which combines bowling, billiards, live music and much more, has relocated to a brand new building in the center of Warsaw. HARMAN Professional Solutions distributor, ESS Audio, won the contract to supply the facility with a complete sound system based around matched HARMAN components.

“The quality and professionalism of our offer and service, the warranty and support we were able to provide as well as the good relationship we already had with the investors was key to our bid,” stated ESS Director Witold Karalow. “In addition, the products we proposed are well known as being high quality.”

“The main system had to be sufficiently powerful for top DJ’s and live artists to perform,” continued Karalow. “Thus VRX was specified as being the obvious option within the available budget.”

Six JBL VRX 932LAP and six SRX828SP subs in cardioid configuration have been installed in the main room, while four JBL EON 612 are provided for stage monitoring. Delays and additional fills for distribution to the mezzanine level, comprise four JBL AC18/95 and four AC18/26, while four AKG WMS470 wireless mic channels have been supplied, along with splitter and antennas. The AC18/95’s are powered by a Crown DCi 8|600N.

ESS Audio’s Peter Bielec and Maciej Barański designed the network for signal distribution entirely over the proprietary BLU link platform, with all loudspeakers powered by four Crown DCi8|600N multi-channel amplifiers. To enable multiple sources to be routed to any of the zones, this network is formed by a combination of Soundweb fixed format BLU-50 (4x4) devices, BLU-100 (12 x 8), user-configurable BLU-800 devices, along with Soundweb Contrio EC4BV / EC8BV Ethernet wall controllers at the reception desks. Two VIP Rooms also have EC4BVs for clients, while one EC8-BV is used to control the conference room.The system is managed from custom HiQnet Audio Architect panels (with room combining) on the PC at the front desk.

Finally, a pair of AKG CGN321 STS table-top paging gooseneck mics are stationed at the main reception and kids’ area so that voice announcements can be made to any of the zones.

“ESS managed to overcome timescale restrictions to deliver an installation that meets all requirements,” said Karalow. “Our aim was to build a really nice, easy-to-use system based on premium HARMAN components and thanks to careful budgeting, this is what we have achieved.”