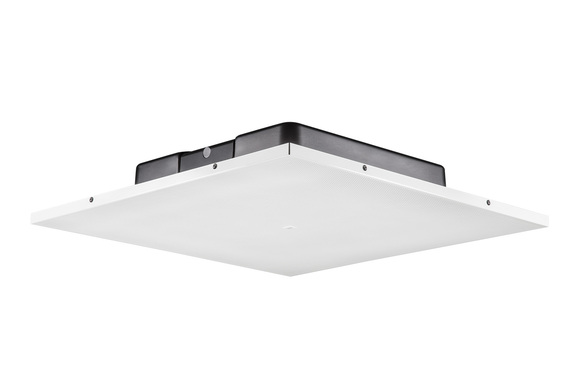 Installation is quick and easy: Simply remove a standard 600mm x 600mm ceiling tile and lay the speaker in its place. With a shallow depth of just 103 mm (4.1 inches), the JBL-LCT 81C/TM can be installed where deeper loudspeakers can’t fit—even in ceiling spaces with HVAC ducts, plumbing and other obstructions. Because the speaker looks like a ceiling vent, it’s ideal for venues where the architect or visual designer doesn’t want the appearance of a ceiling speaker. Use the JBL-LCT 81C/TM on either a 70V or 100V distributed speaker line or at low impedance, for maximum versatility.

“Most in-ceiling speakers require a highly skilled installer to measure and cut precise speaker holes into ceiling tiles, which is a messy, expensive, time-consuming process,” said Rick Kamlet, HARMAN/JBL Senior Manager, Installed Loudspeakers. “The JBL-LCT 81C/TM drops right into standard metric ceiling grids, for fast, neat installation that doesn’t require cuts or modifications to the ceiling and doesn’t contaminate the client’s space. “These speakers really check all the boxes: They’re efficient and affordable, sound great, and can be installed in minutes. And now, with a metric version, anyone in the world can take advantage of their clarity and versatility.”

When it comes to installs, safety comes first. The JBL-LCT 81C/TM is UL1480 and UL2043 certified, allowing use in ceiling plenum spaces where certifications are required. Two safety seismic attachment tabs are provided for securing to a ceiling deck.

The JBL-MTC-CSTeth1 is sold in packs of ten and supports JBL Control 10 Series, Control 20 Series and Control 40 Series speaker lines.