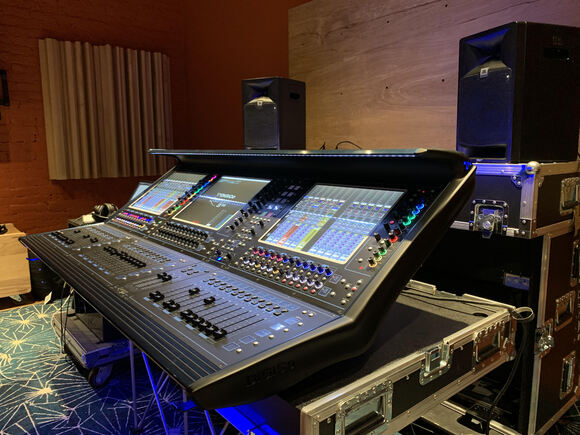 With three multi-platinum albums and more than 7 billion streams on Spotify, Bruno Mars is one of the most beloved and successful artists of the past decade. A talented singer, dancer and multi-instrumentalist, Mars is known for riveting and tightly-rehearsed live shows with his backing band the Hooligans, and most recently, with Anderson .Paak as the R&B duo Silk Sonic. Mars and the band frequently work on new songs while on the road and needed a high-quality mobile recording setup that could be easily assembled in any setting. Moniz, who worked with Mars on his 2012 album Unorthodox Jukebox and 2016’s 24k Magic, selected JBL Professional 708P reference monitors for their studio-grade sound quality, high output and balanced coverage. Additionally, front-of-house engineer Chris Rabold uses them to dial in a consistent live mix in any venue.

“We often record in dressing rooms, locker rooms, kitchens, workout rooms—I had a setup in a bullfighting ring in Spain one time,” said Moniz. “The 708P monitors have a lot of onboard processing to help you tame unruly spaces. A few tweaks with the built-in EQ can help you avoid overcompensating for those frequencies in your mix, as well as enhance the listening experience for everyone in the room.”

Featuring an eight-inch Differential Drive low-frequency transducer and a next-generation 2409H high-frequency compression driver, the 708P delivers pristine sound with an output range several times greater than comparably-sized studio monitors. The built-in LCD display and rear-panel controls make it easy to dial in the right settings for recording and mixing in less-than-ideal spaces. Plus, their compact form factor makes them easy to take on the road. Moniz added that he most enjoys the wide “sweet spot” created by the patent-pending Image Control Waveguide.

“The first time I heard the 708P monitors, I was sitting in front of the console and thought they sounded great,” explained Moniz. “But what really impressed me was when I walked across the room, it still sounded like I was sitting right in front of the console. That’s a huge deal—having things sound balanced throughout the space is such a benefit.”

Chris Rabold, Mars’ front-of-house mixer, uses 708P monitors for pre-show mixes due to their “honest and true” frequency response, which translates seamlessly to live PA systems of any make, model and size.

“The 708P monitors never deceive me and always make my mix sound bigger,” said Rabold. “The low end is thick and punchy, the midrange is honest and intact, and the highs are not overly bright or deceptively sparkly. There's no hype or coloration to them, and because of this, I know that what I'm hearing will translate to any environment.”

Moniz and Rabold both agree that the 708P Master Reference Monitors have the sonic range and versatility needed to provide pristine audio and reliable mixes amid the changing environments and unpredictability of touring. Most importantly, the monitors are what Mars needs to feel inspired and focus on making great music while on the road.

“Everyone is always excited with what we’re creating when they hear it on the 708P monitors,” added Rabold. “Between their SPL capabilities and wide sweet spot, people always have fun listening to them. I don't know how the JBL engineers pulled it off, but my hat goes off to them.”