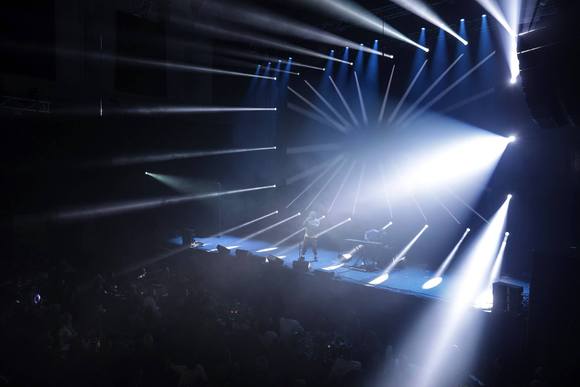 The APRA Silver Scroll Awards is an annual music awards ceremony recognizing the achievements and success of New Zealand-based music creators. Since 1952, the Australasian Performing Rights Association has awarded a single Silver Scroll each year to songwriters and artists across all genres of music, including The Naked And Famous, Bic Runga, Unknown Mortal Orchestra and more. This year, the highly coveted Silver Scroll Award was given to pop superstar Lorde and the songwriters behind the hit “Green Light.”

“Planning for a show like this can be very challenging from an audio perspective,” said David Craig, Audio Production Manager, Strawberry Sound. “It is a corporate awards show, yet we are still handling a number of live bands and artists throughout the evening. The PA system needed to deliver crisp and intelligible speech as well as the power and dynamics of a live band. The VTX system enabled us to provide incredible sound quality and completely balanced coverage at Dunedin Town Hall. And because we used JBL’s extremely useful HiQnet Performance Manager and LAC Line Array Calculator software to design the system beforehand, minimal changes were required once we were in the venue.”

Accomplished sound engineer Kevin Bennett was hired to mix monitors and after being given a choice of several consoles, he selected the Soundcraft Vi2000 for its workflow, audio quality and feature set. The Soundcraft Vi2000 helped Bennett deliver great-sounding monitor mixes for a wide range of performers.

“I was given the option to use a number of different consoles and I decided to go with the small-format Vi2000,” said Bennett. “This was my first opportunity mixing on the Vi2000, and now I’m proud to say it’s my go-to console. First off, the audio quality is superb and I can work very quickly with it. The interface is easy to navigate and the whole thing is extremely dependable—and my love of the built-in BSS DRP901ii Dynamic EQ really sweetens the deal!”

At front of house, FOH engineer Chris Tate utilized a Soundcraft Vi3000 console to support a wide range of musical performances and ensure smooth transitions between speeches by presenters and recipients. The Vi3000’s built-in MADI interface also facilitated the streamlined distribution of all input channels to the television and radio broadcast mixers.

“Working with multiple bands and artists at the Silver Scroll Awards kept me on my toes, but mixing on the Vi3000 console made my life a lot easier,” said Tate. “With the Vi3000’s unique workflow makes operations a breeze, including changing show cues, soft patching channels and arranging tie lines. It’s also very easy to clock-sync with other devices which, when combined with the built-in MADI outputs, made for a very efficient audio distribution solution for handling the live mix and broadcast mixes simultaneously.”

“We are pleased to see the continued growth of Strawberry Sound as a production company, with the ability to provide state of the art sound equipment for large scale events,” says Nicholas van Dyk, audio specialist with New Zealand JBL and Soundcraft distributor JPRO (formerly known as JANDS NZ).