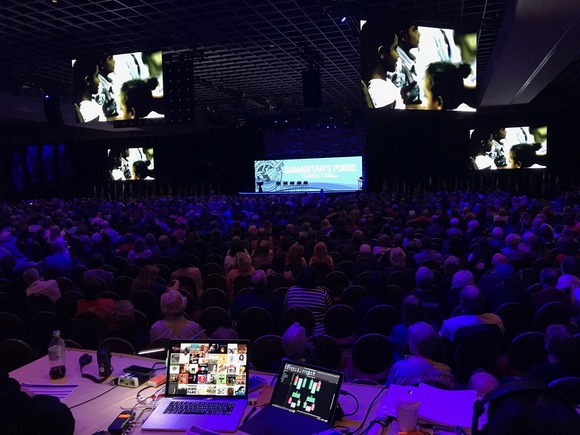 The Global Connect 2017 conference, held in April at Rosen Shingle Creek in Orlando, Florida, was larger than ever this year, with over 3,000 attendees. For the third year in a row, Atlanta-based audio-visual rental company Technical Elements was hired to provide sound and lighting for the speeches and music in the 95,000-square-foot Gatlin Ballroom, as well as dozens of separate rooms throughout the facility. In order to elevate the event’s production values to their highest level yet, Technical Elements deployed a complete HARMAN solution consisting of JBL Professional speakers, Crown amplification and Martin lighting.

“The HARMAN audio and lighting products helped us execute the production plan in a pristine manner,” said Winfrey Shields, owner of Technical Elements. “The clients were very pleased with the clarity of the audio system. We had some challenges with weight ratings for the roof, and we had a number of LED walls in the space, and so we had to get a little creative with the design. But at the end of the day, the success for the customer is the primary goal, and they were elated.”

In the main ballroom, the program was split about 70/30 between spoken content and music. The versatility of the V20 loudspeakers came in handy, as they were able to provide clear sound for the speeches and deftly handle the high SPL from the band without sounding harsh. The relatively light weight of the V20 loudspeakers helped Technical Elements work around the ceiling-weight restrictions in the ballroom.

“The V20 is such a versatile box,” said Shields. “It provided great full-range sound and did a fantastic job of allowing the singers to cut through. The networking capability of the Crown amplifiers was also quite helpful. We were able to shape and manipulate the system at will from a laptop with a wireless router.”

With a multitude of breakout rooms to oversee in addition to the main ballroom, keeping everything running smoothly presented a complex logistical challenge. Technical Elements managed it all through advanced planning, and by bringing in five audio systems techs, five lighting system techs and 38 sound engineers. The excellent sound and reliability of the JBL audio systems also helped greatly.

“There were seven larger breakout rooms that all featured JBL VRX932LAP line-array systems,” said Cosbie Hollenbeck, Account Manager at Technical Elements. “Plus, we had 24 smaller breakout rooms that used JBL PRX, JBL EON ONE, or both. We were very pleased with the performance of all the systems.”

From a lighting standpoint, it was a challenge to create a system for lighting both the stage and the large ballroom. To address this, Technical Elements utilized a combination of Martin fixtures. Aura fixtures were distributed throughout the room as overhead lighting, and could instantly change the color of the entire ballroom when required. The Viper Performance fixtures were used mainly for the stage area.

“The lighting was just as impressive as the audio,” said Hollenbeck. “The setup was super easy. We loved that there were timing shutters for the front light. The Auras and Viper Performance fixtures performed well—the color temperature was great. We love the Martin line.”