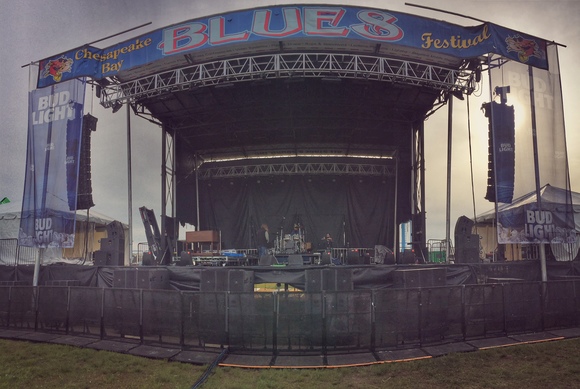 ANNAPOLIS, Md.—Palmetto Soundworks recently deployed JBL by HARMAN VTX Series line arrays to provide amazing live sound at the Chesapeake Bay Blues Festival. Located on the western shore of the Chesapeake Bay, the three-day festival was inundated with some extremely adverse weather conditions, including high winds and driving rain. The premium sound quality and industry-proven reliability of the VTX system enabled the team from Palmetto Sound to overcome the elements and deliver crisp and clean audio that complemented some truly incredible performances.

“We were in really poor weather conditions the whole weekend—we gave floating subs a whole new meaning,” said Jared Miller, Production Manager at Palmetto Soundworks. “The performance of the VTX rig was excellent, even with that much water. I was really impressed with the sound quality and reliability.”

“The high end was really smooth, and the entire VTX system sounded really great out of the box,” said Miller. “A lot of the guest engineers commented on the smoothness of the top end and the overall sound quality. From my point of view as a provider, it’s an easy day for me when guest engineers can start setting up, and it already sounds good. I don’t have to convince anyone of the quality of the VTX rig—engineers come in and know that it will sound good.”

“Performance Manager 2.0 performed flawlessly—we knew we were going to have bad weather, and the software really allowed us to stay on top of the system,” said Miller. “The VTX arrays and VRack amplifiers performed great through some truly terrible conditions. There were no hiccups in the system.”