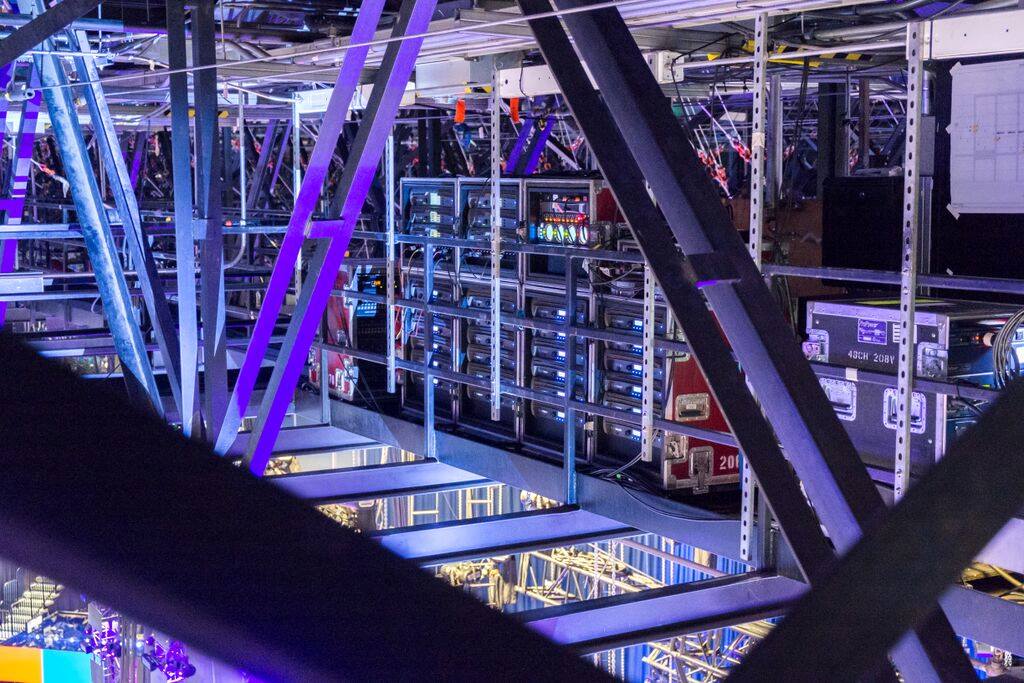 One of the most successful live sound production companies in the United States, Firehouse delivers impactful and clear sound to audiences at some of the largest tours, festivals and corporate events in the country. For the iHeartRadio Music Festival, the goal was to provide powerful and uniform coverage to a crowd of more than 16,000 fans, which Firehouse Productions achieved by deploying a main PA system that featured a left-right configuration of 18 JBL VTX V25-II-CS line array elements per side, plus 16 VTX V20 line array elements per side for out fill. A total of 16 VTX G28 subwoofers provided low-frequency reinforcement, while four V20 loudspeakers and four VERTEC® VT4886 line array loudspeakers were used for front fill. Seventy Crown I-Tech 12000HD and 12 I-Tech 4x3500HD amplifiers powered the system. System management and control were handled with JBL HiQnet Performance Manager™ software, which simplified the system setup and enabled management of the entire system from a single location.

“The integration of the JBL LAC (Line Array Calculator) II and Performance Manager software to design and then control the system was key in allowing us to maintain even coverage from the top row of seating all the way down to the front row,” said Adam Loesch, FOH Systems Engineer, Firehouse Productions. “The new precision inter-angle positions (.5 degrees and .75 degrees) proved to be invaluable in maintaining even coverage and consistent volume throughout the vertical listening plane.”

In addition, Erik Sandberg, FOH Production Mixer for Firehouse Productions, explained the importance of the HARMAN Professional Solutions system to handle various types of music with ease for an event that featured artists from a variety of genres. “The HARMAN system performed very well, providing both clarity and power, as well as great stability with the presenters’ microphones, which were used to introduce the acts from the middle of the arena,” Sandberg noted.

As with most large-scale productions, providing high-impact, low-frequency support is a key to ensuring satisfaction for audiences and artists alike. “The G28 subwoofers definitely got their workout on this musical variety show that ran for more than five hours, as visiting engineers pushed them to their limits, but they never sounded stressed or compressed,” Loesch added. “We also noticed a smooth transition from the left-right hangs [V25-II-CS] to the side hangs [V20]. Also, the new vertical transport system saves us a lot of time and space when loading into a crowded venue floor.”