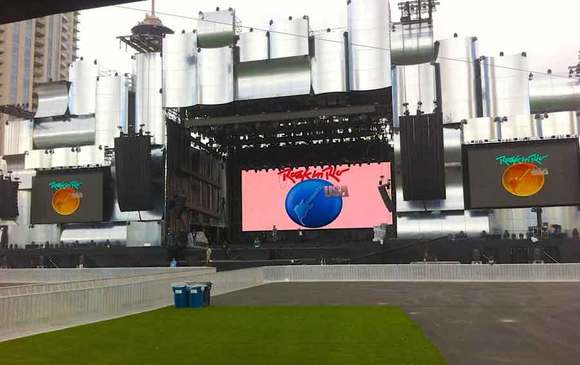 LAS VEGAS, Nevada — Rock in Rio USA made its debut in mid-May, drawing 172,000 fans from around the world over two weekends and featuring performances by artists including Taylor Swift, Bruno Mars, No Doubt, Metallica, Jessie J, Linkin Park and more. While the Las Vegas Strip location was a first for Rock in Rio, the elaborate stage productions and memorable performances were not, as Rock in Rio USA delivered on expectations set by previous Rock in Rio festivals held in Rio de Janeiro, Lisbon and Madrid. As for all Rock in Rio festivals, Gabisom Audio Equipment of Brazil provided the sound reinforcement system for Rock in Rio USA, once again deploying HARMAN’s JBL VTX line arrays powered with Crown I-Tech HD amplifiers on the festival’s main stage. Gabisom provided a massive main PA system for the main stage, arranged in the typical Rock in Rio format, which Gabisom refers to as a “side-by-side” configuration—four hangs, each containing three columns of loudspeakers. The columns closest to the stage (which Gabisom calls the “Band” columns) received a full band mix, minus vocals or any other element of the mixing engineer’s choice. The middle columns were comprised of flown subwoofers, whose feed was derived from the Band mix, creating a 4-way flown system. The outermost columns, known as the “Vocal” columns, received a vocal mix, along with any other elements that the mixing engineer chose. “In this way, we guaranteed that each independent system [Band or Vocal] would not be fighting one another for headroom, allowing full, clean power with no limiting, clipping or acoustical distortion,” said Peter Racy, Chief Engineer or Gabisom Audio Equipment. “This newly found headroom was present right at the mixing console’s summing amps and output busses, in the system processors and power amps, as well as the speaker components. The result was clean, powerful sound.” The PA system featured a total of 128 VTX V25 line array elements, 46 VTX S28 flown subwoofers and 24 VTX G28 ground-stacked subwoofers. A total of 124 Crown I-Tech 12000HD amplifiers powered the system, which was networked via JBL HiQnet Performance Manager™. As is typical for outdoor concerts in Las Vegas, the climate posed a challenge from a technical perspective. “With relative humidity as low as 8 percent and gusty winds lifting dust into the air, we tuned various parameters within Performance Manager, including band-pass gain, subtractive EQ on the low-mids and additive EQ on the highs,” Racy said. “This is quite unusual for the VTX system, on which we normally make a few changes, if any.” However, once Gabisom dialed in the atmospheric compensation, Racy said the system performed exceptionally. “Guest mixing engineers were all very happy with their results, and all had favorable comments on the system,” he added. “The Performance Manager software was a huge asset for both tuning and monitoring the entire system, giving us the confidence that the system was healthy at all times.” “The VTX V25 system has been Gabisom’s system of choice for large outdoor festivals and high-power rock and electronic dance music concerts, due to its high power capability and superb audio quality,” Racy concluded. “It does the job exceedingly well in an effortless manner.”