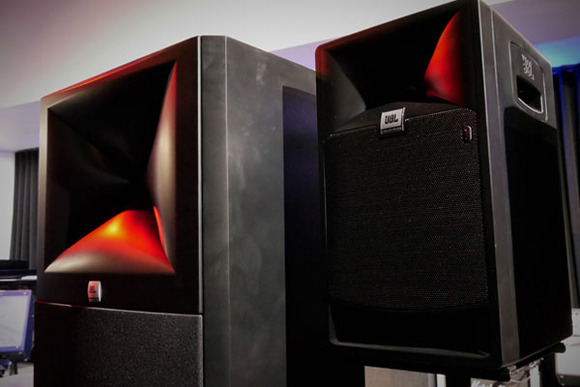 The Australian College of the Arts Pty Ltd (Collarts) is an independent tertiary college specializing in degrees and diplomas in the creative industries, including audio engineering and music production. With four campuses throughout Melbourne, Collarts teaches their students the fundamentals of studio recording, live production, and sound for film. When the college moved its main campus from South Melbourne to Collingwood, they used the opportunity to equip their recording, mastering and post-production studios with class-leading JBL by HARMAN audio systems, including Studio One, Critical Listening and an immersive Dolby Atmos Room.

The Atmos Room, primarily used for creating Dolby Atmos mixes to video, is outfitted with 20 JBL loudspeakers, including three JBL 708P monitors in L/C/R configuration, 10 705P monitors around the walls, six Control 2P monitors on the ceiling and a JBL S2SEX 15-inch subwoofer powered by a Crown amplifier. The system is controlled using a JBL Intonato 24 Monitor Management and Tuning System, which provides EQ, delay, and format switching between Atmos, 7.5, 5.1 and stereo.

Collart’s new JBL audio system provides consistent tone, coverage and accuracy, even when moving from studio to studio. Even in the Atmos Room, which features different designs and driver sizes, each speaker works together with coherent phase response to deliver even, balanced sound.

“The new waveguide that JBL designed for the M2s is a big part of that consistency,” said Chris Hansen, Director of Recording and Content Creation for Harman Professional Solutions. “It was designed to work with the new D2 Compression Driver, also designed for the M2. Because of the new high frequency driver and the waveguide, the M2’s have a much wider sound-stage than other monitors. Listeners can move up to 60 degrees off axis and still get the same frequency response as center. This technology has filtered down the range, and is a big part of the reason for the sonic consistency.”

“The D2 Compression Driver JBL have engineered for the M2 is astonishingly good,” said Dr. Paul Doornbusch, Associate Dean of Collart. “We’re all hearing better mid-range and more transparency in the high-end. To my ear, the M2s sound just as good as my personal reference, the legendary Quad ESL electrostatic loudspeakers. JBL have solved problems at the source by developing new drivers instead of retrofitting an existing design or using DSP; it’s a fundamentally better solution. The R&D that JBL have put into those loudspeakers is underreported and underappreciated. It’s a fresh approach, with smart engineering, and the results are sensational.”

JBL’s design goals for the M2 Master Reference Monitors were driven by changes in the recording and production industry that have seen audio mixing moving from purpose-built facilities into renovated and adapted spaces. The M2’s two way-design and optimized high-frequency driver were designed to deliver a ‘big monitor’ sound in compact, affordable package. The demand for mixing in new and smaller spaces is even more pronounced with video and post-production projects. As content companies like Netflix require all submissions to be in Dolby Atmos, more and more environments are being fitted with immersive mixing systems.

“This trend is driving the design flowing from the M2 Master Reference Monitors into the LSR 7 Series studio monitors,” said Hansen. “The engineers need high output to hit the Dolby SPL spec at the mix position, with even frequency response and ultra-low distortion. The waveguide design matched with new compression driver and two new woofer models used in the LSR monitors have achieved this. The woofer in the LSR708P is capable of 18 millimeters of excursion, which is why it can reproduce frequencies down to 30 Hz, delivering 85 dB SPL at five meters with 20 dB of headroom.”

Dr. Doornbusch sees the Atmos Room at Collarts as essential for preparing their students for the immediate future of the industry.

“I see a world where there will be convergence of gaming, cinema and VR,” said Dr. Doornbusch. “The audio industry should be moving towards a ‘produce once and deliver’ workflow where we mix to a standard such as Dolby Atmos which then renders at playback to suit the equipment it’s being reproduced on, whether that’s Atmos, 7.1, 5.1, stereo, or Ambisonics. I think VR and gaming are definitely moving that way.”

Collarts selected a mix of 708P, 705P, and Control 2P loudspeakers in The Atmos to satisfy a Dolby Atmos specification.

“A lot of studios are mixing with the Dolby minimum recommendation of nine loudspeakers,” said Dr. Doornbusch. “But we wanted to go for something more impressive. The consistency of phase and voicing across the different models used in the Atmos Room is impressive and as good as I’ve ever heard. The 708Ps and 705Ps are highly comparable, with a little more bottom detectable in the 8s, but remarkably, not a big difference in the mid-range.”

With a range of high-performance studio monitors available on the marketplace, Collarts chose JBL monitors for their performance and price.

“The decision was partially financial, and partially on the results,” said Dr. Doornbusch. “Other monitoring solutions were similarly priced, or more expensive, and the JBL range simply gave better audio performance across the applications.”

“Collarts students now have access to studios, a mastering suite and an Atmos room with a quality of sound reproduction they can’t get anywhere else,” said Dr. Doornbusch. “Even if they have decent monitors at home, you just can’t get the low-end, the lower distortion, surround sound speakers or treated rooms without spending the money. Our students are now receiving a premium audio education, and that gives them every reason to come and work on campus. It also establishes a benchmark for them, so when they graduate and are working in the industry, and are in a position to specify equipment, they can specify something that sounds just as good.”