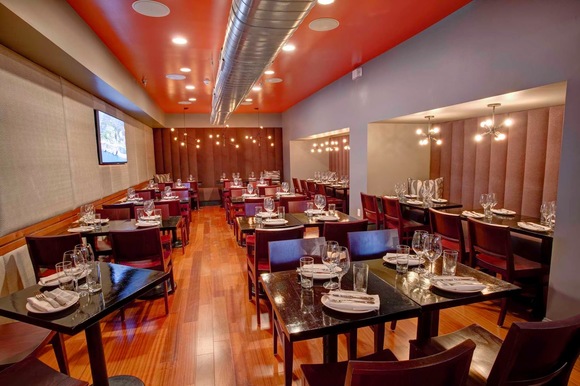 SOUTH PHILADELPHIA, Pennsylvania — In the revitalized neighborhood of south Philadelphia, famous chef and Philly native Luke Palladino is returning to his old stomping grounds with a new restaurant called (what else?) Palladino’s. The restaurant opened on December 17 and features gourmet Italian cuisine and world-class atmospherics courtesy of a HARMAN Professional audio system.
Ian Hoffer of Aurora Sound and Light Design, who has provided audio and lighting systems for some of the most popular clubs, bars and restaurants on the East Coast, designed the audio configuration for Palladino’s. The restaurant is separated into three separate zones and features a variety of BSS Audio signal processing, Crown amplifiers and JBL loudspeakers.
“Like many restaurant and bar projects, budget was a major factor when it came to technology, but we also did not want to compromise in quality,” Hoffer noted. “I’ve had a lot of success with HARMAN in the past and the combination of BSS, Crown and JBL allowed us to install a really nice system for the 100-person capacity restaurant.”
The audio system at Palladino’s is separated into three zones: the dining room, bar and exterior patio. A total of 21 JBL Control 226CT ceiling loudspeakers—Kevlar-reinforced woofers and compression drivers for highs—are dispersed throughout these zones, with Crown CDi4000 and CDi1000 amplifiers powering the system.
“The BSS BLU-8 was chosen as it provides for more control options than a simple volume control. The manager can select from multiple sources—TV, Mac Mini, DJ input, or an iPod,” Hoffer noted. “I installed JBL ceiling speakers at the Rumor club in Philadelphia a few years ago, so I knew they would work well at Palladino’s. That, combined with a BSS BLU-50 signal processor, gives us a lot of options and kept the technology budget in check.”
For more information on Aurora Sound and Light Design, please call 609-433-6289.