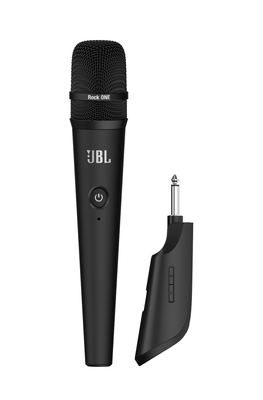 The JBL Rock ONE series is the first truly portable UHF microphone solution. It pairs perfectly with the JBL EON ONE series and is compatible with most other portable PAs as well. The system combines a sleek, contemporary design and support for up to four Rock ONE microphone/receiver sets to be used simultaneously – each easily identifiable with choice of exchangeable red, white, yellow or pink color plates.

Empowering artists and presenters to perform from anywhere, the Rock ONE system features on-the-go charging of both the receiver and the microphone via the included USB-C cable. There’s never a need to plug into the wall or any external power source – both the microphone and receiver can charge directly from the JBL EON ONE. And this system can go the distance with a full 10 hours of working time, on a single charge.

10-band UHF wireless transmission and infrared pairing give the Rock ONE a clear advantage over 2.4G / 5.2G wireless systems, which are traditionally much more susceptible to interference. And with up to 30 meters of wireless range between the mic and receiver, presenters and performers have the freedom to work rooms of all shapes and sizes.