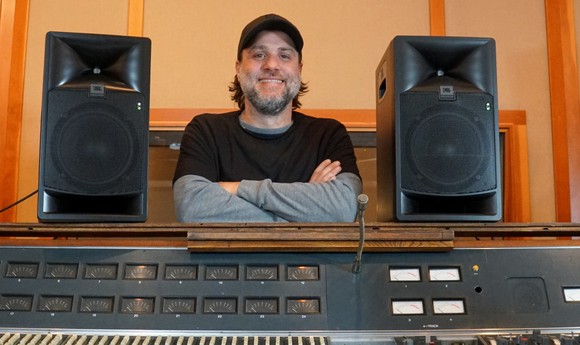 Lousteau is an accomplished engineer and producer who has worked with artists like Foo Fighters, Iggy Pop and Joan Jett. Lousteau is the chief engineer at Studio 606, which is owned by rock icons the Foo Fighters. Lousteau also records at Foo Fighters drummer Taylor Hawkins home studios, as well as his own home studio. Lousteau recently installed a pair of JBL 7 Series monitors at Studio 606 for their exceptional output, stunning detail, and unparalleled clarity. Lousteau was so impressed with their detail and clarity that he equipped his and Taylor’s studios with them as well. Now Lousteau can enjoy consistently great sound between all three studios.

“We’ve used monitors from dozens of different brands over the years, but there’s something special about the JBL 7 Series—they just speak to me,” said Lousteau. “Something about them sounds really good. They have a tightness in the low-end, and the mids and highs and really transparent and clear—they’re super accurate. As soon as I heard them, I was like ‘Oh, those are killer!’ Within two months I bought a pair for my house and for Taylor’s house.”

Lousteau started his career as a runner at Studio 606 in the early 2000s, just before digital audio and home studios began to take over.

“I was playing in a cover band in Knoxville, TN and my buddy Nick Raskulinecz was starting to do well as a record producer out in LA,” said Lousteau. “Nick offered me a job as a runner at Studio 606, so I moved to LA and started working as his assistant—which is where I met the Foo Fighters. Within eight months, Nick decided to move back to Nashville. After he left, I was friendly enough with Taylor [Hawkins] and Dave [Grohl] that they offered me the gig.”

Lousteau learned to record on analog equipment, giving him a unique insight into making records in the digital age.

“I try to go super organic when recording,” said Lousteau. “I want to record a microphone on an amplifier. I want to record a drum kit, you know? I try to tailor the instrument to the sound. That’s what I love about the 7 Series—the midrange really lets you know when you’re giving it too much. They’re also really loud, which is a great for working with a loud drummer like Taylor.”

Lousteau takes a unique approach to mixing, focusing on the drums and vocals first. The JBL 7 Series monitors allow him to dial in the foundation of the track, while highlighting potential frequency problems.

“I start with kick and snare and try to get a nice blend,” said Lousteau. “When I feel like they are in a comfortable spot, I bring up the vocal next. Like, ‘Where are the vocal and the kick and the snare going to sit?’ In a rock song, that’s really prevalent—that’s what you’re hearing right up front. Then I bring in the guitars and try to fill the space around that. The guitars have to sit with the vocal but outside the vocal. The last thing I’ll blend in is the bass.”

Lousteau says the thing he loves most about the 7 Series monitors is how his mixes translate to other systems.

“The control room at my house is in a spare bedroom, and at Taylor’s place isn’t even treated—it’s a guesthouse,” said Lousteau. “With the 7 Series I know I can trust the low-end in all three studios. They translate really well. That’s the biggest thing—I trust them in almost any room. Now I can go between any of the three studios and I know exactly what it sounds like—it’s awesome.”