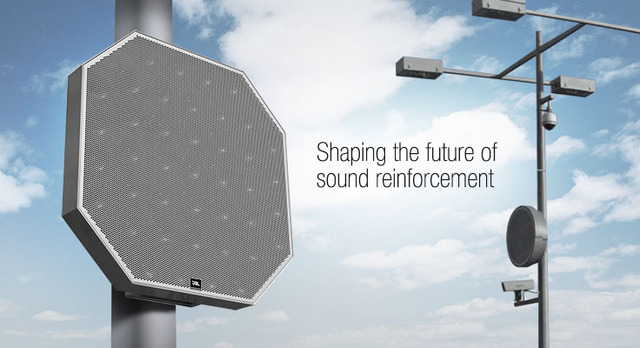 较大的图像
JBL Professional IntelliDisc-DS90 was originally developed for the ‘Berlin Hauptbahnhof’ Berlin’s main railway station. The station’s layout of 14 platforms on 2 levels, with open areas between floors, required a solution that would offer high intelligibility with little or no overspill onto adjoining platforms and levels.

The JBL Professional® IntelliDisc-DS90 is the world’s first fully integrated, digitally controlled, two dimensional loudspeaker array. The IntelliDisc utilizes our DDS technology allowing control over both the horizontal and vertical beam steering. The dispersion can be shaped to a very narrow beam, keeping sound away from areas where it is not wanted. The beam can then be digitally steered to the left, to the right, up or down.

DDS is based on a unique, specially adapted ‘constrained weighted least-squares’ optimization algorithm. Starting from a desired direct SPL distribution in a hall or space, the optimum output filter for each array channel is calculated. In other words, the desired ‘illumination’ of the hall or space is ‘mapped’ back to the array, instead of mapping the array response to the hall, as would be done with a conventional loudspeaker array.

Using DDS technology any desired two dimensional radiation pattern can be synthesized from the IntelliDisc-DS90. This allows users to ‘mould’ both the vertical and horizontal dispersion of the array to perfectly fit the audience area; whilst at the same time avoiding unwanted reflections and spill. The result is an array which can offer a high ratio of direct sound to reverberant sound, which is critical for achieving high levels of speech intelligibility, in the most difficult of acoustic environments. In addition to this the unit can reduce noise nuisance in outdoor applications.

It has proven to be a versatile and effective solution for vocal reinforcement within reverberant environments, offering excellent speech intelligibility; even in demanding acoustic conditions.
LONG THROW & CONSTANT SPL
The IntelliDisc-DS90 is capable of providing a constant sound pressure level over a distance of up to 30 meters, although a substantial extension of this range can be achieved in less demanding acoustical conditions.

Horizontal and Vertical Direct SPL plots for a single JBL Professional IntelliDisc-DS90
SAFETY FEATURES
The IntelliDisc-DS90 is also equipped with a RISC processor to take care of surveillance rou- tines, which are performed every 1/20 second. In addition to this the RISC processor is monitored by a watchdog, So, in the event of a failure, the processor will be reset.

Surveillance functions include, but are not limited to:

• DSP functionality
All relevant status parameters and temperatures can be monitored via the RS-485 network. Failures can be reported by the on board failure relay or via one of the many features offered by WinControl.
SPECIFICATIONS
ACOUSTICAL:
Frequency Range: 130 - 12k Hz (+/-3 dB)