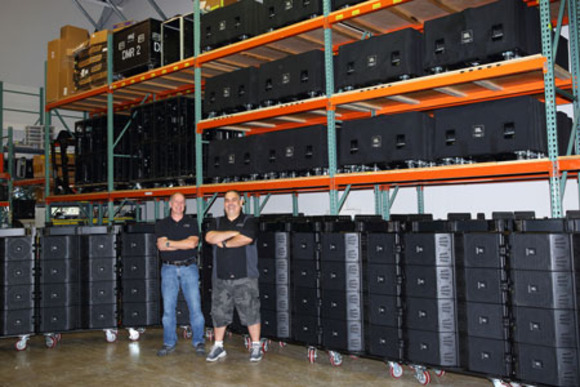 Multi Image Group has been a HARMAN Professional dealer and user for nine years. “I’ve always been a fan of JBL and have used their loudspeakers since 1981,” said MIG Audio Department Manager Andy Kakas. “I’ve been blown away by their VERTEC® line arrays, especially the way they maintain a stable sonic image in a variety of situations. I really wanted to put the newer VTX line arrays through their paces because in my experience JBL loudspeaker systems just keep getting better.”

Kakas’ interest dovetailed with Multi Image Group’s need to acquire another loudspeaker system for arena events—in the last two years MIG had been doing more and more arena and stadium events along with ballroom and theater productions. Kakas had heard a VTX V25 line array system at an Orlando stadium concert and was impressed by the way it sounded, how easy it was to rig and the way the sonic image stayed intact even from 200 to 250 feet away. Soon after, JBL introduced the smaller V20 loudspeaker and Kakas knew it would be even more adaptable to the type of venues MIG services.

Knowing from his own experience the benefits of upgrading to the I-Tech HD amplifiers, Kakas believed the VTX rig would represent another major step forward. “We weren’t using Crown amplifiers when I joined the company. I didn’t agree with this because I had been using Crown since I started in the professional sound industry back in 1981 and they were always bulletproof.”

However, Kakas first had to convince MIG’s owner. Kakas pointed out that in eight years of owning VERTEC VT4888 line arrays they had almost no driver failures, and had recouped their investment on them in three years. An audition of the V20 at the recent Winter NAMM show sealed the deal: “We heard them and realized, that’s the way a PA should sound.”

Since taking delivery of the JBL VTX V20, MIG’s initial impressions have only been reinforced. “The size of the V20 is perfect for what we do, the loudspeakers sound exceptionally good and the V20 is loud for its size, so in situations where I’d normally have to bring a bigger box, I can stick with the V20,” said Edward Gonzalez, Audio Engineer and System Designer at Multi Image Group. “In a lot of the corporate events we do, I’m fighting height--I have to work around low ceilings in ballrooms, so the smaller size of the V20 is a major advantage.”

Gonzalez, Kakas and the rest of the MIG crew are impressed with every aspect of the V20’s sound, yet single out the newly refined Radiation Boundary Integrator™ (RBI) waveguide, which provides broader, more stable horizontal coverage and a more seamless transition between the high-frequency and midrange drivers. “The new HF driver throws really far and sounds incredibly clean and smooth,” Gonzalez noted. Using the V20 with the Crown I-Tech HD Series amplifiers provides another advantage— the amps’ internal processing is designed to optimize the performance of the V20 (and other JBL models) and enables the crew to carry one less piece of external gear.

“With the I-Tech HDs there is a lot of sonic detail. It has a transparent top end, which has an open and natural sound. It maintains the Crown dampening that gives you that punch in your chest. Also, the Cobranet™ integration is quite useful since we have had a need for multiple channels of AES from front of house to the stage and the amp racks,” added Kakas.

MIG controls its systems with JBL HiQnet Performance Manager™, which Gonzalez helped beta test and finds a major step forward from the previous System Architect. Performance Manager now provides pre-configured control panels instead of having to build them from scratch – a significant time saver. The built-in JBL Line Array Calculator II loudspeaker setup and calibration software is improved to the point where Gonzalez can predict the locations of where the loudspeakers should be set up and get them almost dead-on to their final placements. He also likes Performance Manager’s ability to automatically reconfigure itself. “If the number of amplifiers in the system is changed, I don’t have to manually re-address the locations of the amplifiers on the network,” Gonzalez noted. “I’m excited to mix on something that sounds so good. It’s a very high-fidelity system. It doesn’t sound like a PA—it sounds like a high-end audio system you’d have at home.”