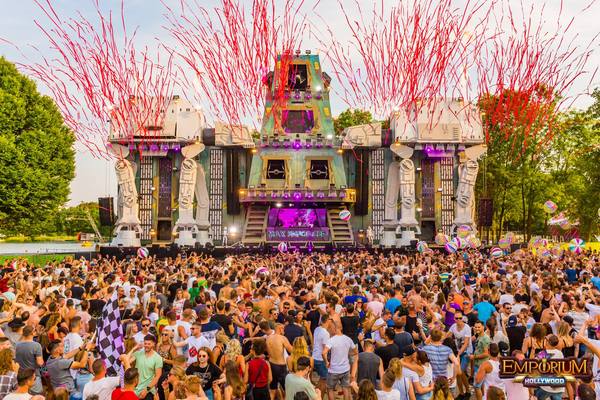 Founded in 2005 by Dutch promoter Matrixx Events, Emporium Festival is an annual dance music festival held near the city of Wijchen in Berendonck Park. This year, 30,000 dance music fans came together to enjoy a robust lineup of DJs and performers across nine stages. To ensure a powerful and immersive live music experience for fans and performers alike, Emporium hired Story Event Engineering to design and deploy sound reinforcement systems for all nine stages.

To ensure optimized system performance across all nine stages, the Story Event Engineering team relied on a range of JBL VTX and VRX speakers and subs assembled in different configurations, tailored to the needs of each stage with regards to size and genre represented. For the two main stages, Story Event Engineering selected VTX A12 line arrays, which enabled production Manager Koen Wijnands and his team to achieve incredible power, depth and clarity with minimal system tuning.

Dutch promoters and engineers have been so impressed with Story Event Engineering’s production quality that the company attributes a part of its growth directly to the VTX A12.

“We’ve been providing sound for Emporium Festival for over 10 years, and every year, our company grows along with it,” said Paul Lehmann, Sales Representative & System Engineer, Story Event Engineering. “This year alone we used more than 400 JBL speakers and 200 Crown amps. Nine independent systems at a festival of this size can be a lot to keep up with, so it’s important to have reliability and consistency among all the gear. From JBL VTX 12 main rigs and VRX DJ monitors to Crown amps and Soundcraft mixers, we used HARMAN Professional live sound solutions across the board.”

“So far, everyone who heard the A12 system is blown away by its sound quality,” concluded Lehmann. “Electronic music has a lot of subtle effects that sometimes get lost in other systems. Because of the clarity of the A12 system, you can hear every detail in the music and that’s what drives the audiences crazy. We’ve deployed these at other festivals and promoters have been astonished with the results. You could say the A12 system performs so well, it generates more business all by itself.”

“From the first time we heard the VTX A12, we’ve been extremely impressed by its sound quality and performance,” continued Lehmann. “The A12’s clarity is amazing and its headroom is unbelievable—and the best part is it doesn’t require a lot of tweaking to make it sound good. From electronic styles like house, EDM and techno to live bands playing pop and rock, the A12 can handle any genre of music right out of the box. And the rigging is so simple and well thought out—as long as you do your calculations beforehand, you just throw up the A12’s, turn up the volume and it sounds great!”