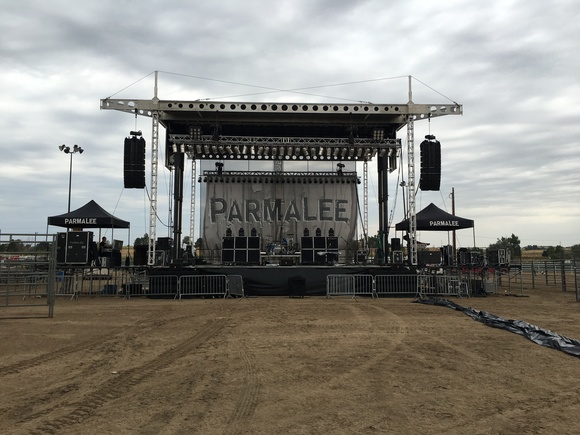 NORTHRIDGE, Calif.— Colorado-based entertainment and event production company Kinnon Entertainment is reaping the benefits of their investment in JBL by HARMAN VTX Series loudspeakers and Crown I-Tech HD amplifiers. Kinnon Entertainment, which has a long-standing relationship with HARMAN Professional Solutions, purchased the system in June of 2015. Since then, the company has experienced exponential business growth and recently concluded a successful year of productions which included national concert tours, high-profile sports events and more.

“The rig was incredibly easy to use, which allowed us to be quick and efficient,” said Blecha. “We started small, but grew to the point where we were doing concerts, car shows, promotional events and smaller festivals that hosted a couple thousand people. We did like 350 gigs on that VRX system—it really helped us break into the industry.”

“As a business we've always taken strides to be at the forefront of our industry, but when we got the VTX system it was a total game changer,” continued Blecha. “Since getting our VTX system last June, we’ve been able to tackle much larger events and our revenue has doubled. VTX is the future of our company, no doubt.”

Blecha attributes part of Kinnon Entertainment’s continued success to the intuitive design of VTX. The new system has allowed the production team to become more efficient, train quickly and easily, as well as feel confident in their abilities to provide consistent, quality service to existing and prospective customers.

“It’s obvious that VTX is designed and engineered by audio gurus who also understand the challenges we face in the field,” added Blecha. “How easy I can tear down a rig is so crucial. When you’re popping covers on speakers at 2 a.m. after an 18-hour day or dealing with a curfew and street closures because the event ran overtime, it’s great to have an easy-to-use rig. With VTX, everything goes together so smoothly, its practical and sounds great.”

“VTX is so efficient that I can take a stagehand who isn’t too experienced, show him how to help assemble the rig and they completely understand and feel confident they can do it,” said Blecha. “In September 2015 the team went out to Northridge to get trained by HARMAN. We learned so much and feel even more confident in our abilities. The incredible efficiency of VTX has made me completely rethink other facets of our business and see ways we can become more efficient in the future.”

“The next step for us is to get a VTX V25 rig in a semi-truck on tour with a band,” shared Blecha. “Kinnon Entertainment is one of only two companies in Colorado to have VTX V20, and no one has V25. We want to be the first. We also want to expand our inventory of VTX V20 Series elements so we can have two rigs for medium to larger events. It’s all about becoming more efficient, taking on more resume building gigs and continuing to grow. There’s no way we could do what we do without JBL systems.”