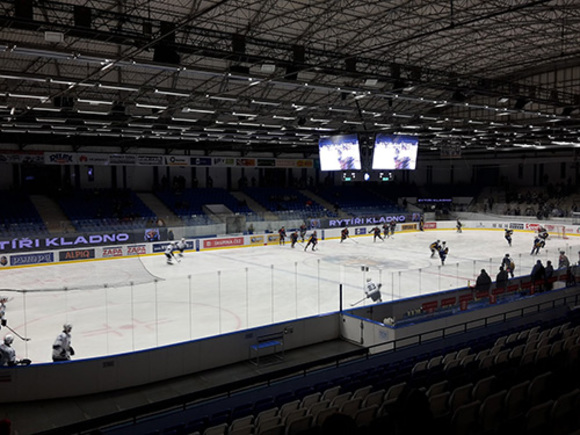 KLADNO, Czech Republic–– A comprehensive HARMAN Professional Solutions sound system has been installed in ČEZ Stadium Kladno, one of the oldest ice hockey stadiums of its kind in the Czech Republic.  Originally opened in 1949 as an open air stadium, the ČEZ added a roof in 1959 and underwent an extensive reconstruction project in 2014. With an overall capacity of 5,200, the stadium’s two ice rinks have hosted many great Czech hockey players, world champions and Czech Olympic winners who trained at the stadium. Today, the stadium is home to local hockey club Rytíři Kladno and many aspiring figure skaters.

Struggling for many years with an outdated, unsatisfactory audio system, stadium management recently turned to local HARMAN Professional Solutions distributor AudioMaster CZ to orchestrate a comprehensive modernization. According to Project Manager Matej Sborovy, the goal of the upgrade was to put in a sound system that can be used for all of the stadium’s audio needs, including hockey matches, figure skating and training. Special attention was given to address the stadium’s size and shape, the low-but-wide seating platforms and the increased humidity inside the stadium.

“We designed the system around JBL SRX800 Series loudspeakers, including 16 SRX815, six SRX812 and four STX818 models,” said Sborovy. “The SRX800 Series offers an excellent price and performance ratio, great sound quality and high output. We really like these speakers, and we use them wherever we can. We keep finding new uses for them—they are very versatile. We also used an additional eight JBL AWC82 enclosures to cover the shorter sides of the seating platform.”

“For digital audio distribution, we decided to use BSS London BLU devices due to the excessive power loss on potential, long-run audio wiring,” said Sborovy. “The core of the system is a HARMAN HiQnet Audio Architect™ panel that provides users quick control over the entire system. The Signature 12 is a high-performance, 12-input, small-format analog mixer with onboard effects.”

“On the ice, we’re using AKG WMS470 vocal and sport wireless microphones for the presenters, timekeepers and judges,” said Sborovy. “In the control room, we have a pair of JBL LSR305 studio monitors. Because the control room is completely soundproof, we placed four AKG P170 condenser microphones in the stadium for picking up the atmosphere and ambient sound of the hall.”

“The whole installation was possible to finish in a relatively short time of only five days. We managed to achieve amazing speech intelligibility and very high output strong enough to handle even the loudest hockey fans with ease along with perfect sound coverage,” said Sborovy.