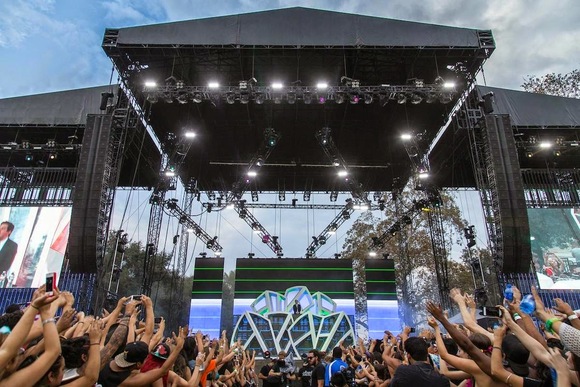 LOS ANGELES, California – As an audio system provider with a 40-year history of working with world-class audio equipment, Flag Systems was again contracted to provide sound reinforcement and personnel for this year’s HARD Summer Festival. Having used HARMAN’s JBL VERTEC® line arrays for over a decade, the company recently decided to upgrade to JBL VTX Series line arrays, exceeding all expectations at the show.

The HARD Summer Festival is an electronic music dance festival, featuring some of the world’s top DJs. Naturally, this requires the highest volume levels and a heavy bass from the PA system, which not only needed to move a tremendous amount of air, but also due to city noise ordinances must have balanced SPL combined with precise pattern control. With guest appearances like Mary J. Blige and DJ Tiesto, system designers dazzled audiences with a total of 40 JBL VTX V25 loudspeakers and 44 VTX S28 subwoofers on the main stage.

Flag Systems was responsible for the audio at the main outdoor stage and one tent. On the main stage, it set up two hangs of 18 VTX V25 line arrays for the main LR system and four VTX V25 units as front fills. By using the same loudspeakers for the main hang and front fills, they were able to provide sonic consistency while maintaining high SPL’s that smaller loudspeakers cannot deliver. To ensure that the attendees enjoyed a bass-heavy experience with controlled coverage, the subwoofers were set up in a delay-steered end-fire cardioid configuration of 11 2x2 blocks.

The tent that Flag Systems was responsible for, dubbed “Pink Tent”, had a system consisting of two hangs of eight VERTEC® VT4889 line arrays and two of Flag Systems’ recently-acquired VTX V20 loudspeakers for front fills. Outside the tent for out fills and delays, there were two stacks of four VT4889 loudspeakers on risers and four of Flag System’s new proprietary SubX on each side. For the DJ monitors Flag used one VTX S25 and three V20 loudspeakers per side.

“At the request of guest engineers, we needed a system that could deliver all of the low-end frequencies in an accurate and powerful fashion,” said Dale West, Systems Designer of Flag Systems. “We believe that the JBL VTX Series is a phenomenal sounding system. The high end of the D2 driver never needs a lot of EQ, staying extremely linear as the output level increases, and the subwoofers are equally impressive. In order to generate the balanced SPL we needed for this festival and still have cancelation behind the stage, we end-fired the subs because it allowed us to achieve this with fewer boxes when compared to a traditional cardioid configuration.”

“We used Performance Manager because it is an amazing tool for system alignment, control over circuit-based EQ’ing, level control and delay times to add digital arc delays for optimum horizontal sub steering,” said West. “On a show like this where a system is pushed to its limits, it’s an absolute must to monitor system health, limiter threshold and component health. I never leave home without it.”

With this setup, the PA system exceeded the requirements of the audience as well as the touring engineers. The unique configuration rewarded the team with a good rear rejection, high SPL, smooth high end and powerful bass. West was mostly impressed by VTX’s ability to be tuned easily for any application, and is pleased with the increased efficiency of this upgrade.

“I can see that JBL did a lot of work designing these components, that in turn helps us a lot with systems design and implementation,” said West. “When I have the time to do my due diligence, by capturing multiple mic measurements and really delve into circuit based level and EQ-ing, the results have been jaw dropping. However when there is a time crunch I have complete confidence I’ll be able to get a PA into the air and timed correctly and get a fairly linear, distortion free system with a high SPL in relatively little time. With JBL VTX every show ends with smiles from the audience, artists and techs. I really enjoy using this product.”

Flag Systems will again be providing VTX for the upcoming Hard Festival Day of the Dead taking place Nov 1-2 in Los Angeles.